When I noticed that one of the headlamps in my car had burned out, I checked beneath the hood but found no obvious access to the bulb. So, I consulted the owner’s manual to find out how to replace it, and it said to take the car to a dealer. For a lightbulb?!? I don’t think so. What do I look like, an Aggie? 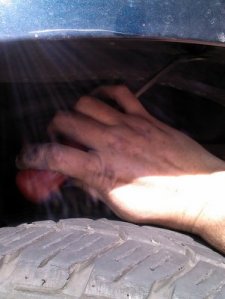 Popping off plastic rivets from the wheel well cover

When in doubt, check YouTube! Sure enough, I found a step-by-step video on replacing the headlamp on my particular vehicle. Turns out that you have to access the headlight assembly from underneath. (Sometimes, I think there is a conspiracy among car manufacturers to make things look difficult, so that we’ll pay to have it fixed.)

Armed with a beach towel to protect me from the scalding-hot driveway, a paper towel to keep from damaging the new bulb with my bare fingers, a pair of screwdrivers and another tool that kinda looks like a split-tip screwdriver with a slight bend in the shaft (photo, right), I went to work. 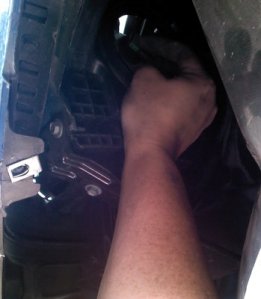 The boys were in the middle of an all-out Nerf war that spanned the front & back yards and driveway, so I preemptively threatened anyone who stepped on me and told them to give me elbow room to work.

Getting dirty didn’t bother me, but the heat was ridiculous. Sweat kept dripping in my eyes, but I couldn’t wipe it away with greasy hands.

There were about three screws and three rivets holding the wheel well cover in place. I finally loosened and pulled it away from the bumper and found the cover to the light assembly. It screws on like a gas cover, just about a quarter-turn to lock into place. The bulb itself is easy to change. There are plastic hooks that you squeeze to release, then just pull out the bulb. The new bulb snaps right into place, and you turn to lock it just like the cap. 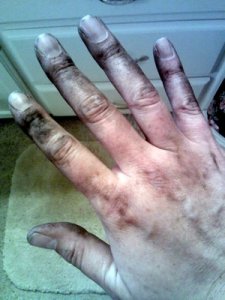 I decided to document my efforts, not as another how-to post, necessarily, but like the washing machine project from a few months ago, I want to encourage others to give it a try. Why pay for labor when it’s not a huge undertaking to fix it yourself? 🙂 Besides, I think it’s great for the boys to see that Mom isn’t afraid to get dirty and fix something, because I don’t want them to think that all women are helpless, prissy princesses.

Granted, I needed another shower and a nail brush when I got finished, but wow, what a great feeling to fix something myself!

Because I need MORE distractions?!?

Make your own Mad Libs!

Thanks for stopping by!